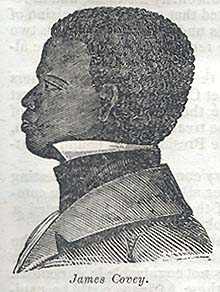 The Ekopolitan Project is coming to you live from the beautiful Pacific Ocean city of Vancouver, Canada where I have been attending a conference of the Society for the History of Childhood and Youth all week. This edition of Record of the Week was discovered from a paper that was given at the 2015 SHCY conference by historian Benjamin Lawrance.

The Record of the Week is an 1840 portrait of a youth who was known as James Covey. Professor Lawrance who writes about James Covey in his book, Amistad’s Orphans, describes him as follows:

“Covey was born circa 1825 -26, kidnapped from his parents’ home as a small child, and sold into slavery in Africa as a young boy. He worked on a rice paddy for several years near the Galinhas coast before being sold to a European slave trader and put into a slave hold. The British West Africa Squadron captured the ship transporting Covey, aged about nine, and he was taken to Freetown and placed in a mission school for about five years. In 1838 he was apprenticed to the Royal Navy ship, Buzzard, and in 1839, he sailed into New York City. After serving as the primary translator for the (Amistad) trials, he fell into poverty in 1840. Eventually, he persuaded the advocates of the Amistad survivors to fund his return to Africa. In Sierra Leone he lived with the mission for several years but later absconded.” Text Source: Benjamin Lawrance, Amistad’s Orphans (New Haven: Yale University Press, 2014) 8-9.

How is the experience of migration differentiated according to age (and sex)? What proportion of migrants to 19th century Lagos would be considered children or youth today? What proportion would have been considered children or youth in their own time? How did migrating from one part of the world to another, one society to another, from captive or enslaved status to freer status, impact people’s understandings of their own identities?

What questions do you have about young migrants, old migrants, and the impact of age in general on 19th century migrations to Lagos or other parts of West Africa? Like, comment, share with your networks. And please contribute your family histories to the Ekopolitan Project. Future generations will thank you and so will we.